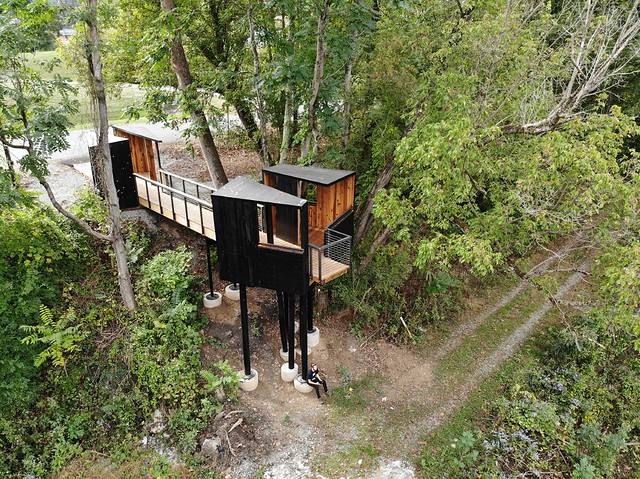 When a group of architecture students at Virginia Tech needed to bring a design to life they turned to the SVHEC's R&D Center for Advanced Manufacturing & Energy Efficiency.

A custom training tool is now available to IT students and trainees in the Southern Virginia Higher Education Center’s (SVHEC) IT Academy and Southside Virginia Community College’s Center for Information Technology Excellence (CITE).

Engineered and built by the SVHEC’s R&D Center, the “Exploded PC” trainer exposes the internal components of a personal computer (PC) so trainees can see how each component works in driving the machine. As trainees replace parts or unplug components, they’re able to see the immediate effects of their actions, giving them a better understanding of how a PC operates.

Having a strong understanding of the parts and functions of a PC is a fundamental skill for technicians, and is heavily tested on the CompTIA A+ certification exam. Currently there is nothing like this trainer on the market, giving IT Academy and CITE trainees a unique hands-on learning experience.

The “Exploded PC” is a collaborative effort between SVCC who funded the project, SVHEC’s R&D Center who engineered the trainer and produced the custom parts, and the SVHEC’s IT Academy staff who tested the prototype and provided guidance on how to enhance its usability. The partners plan on continuing to refine the trainer, and eventually produce a smaller version that can be taken on the road to college and career fairs.

Continuing a successful run of producing beautiful, custom trophies, the SVHEC’s R&D Center for Advanced Manufacturing & Energy Efficiency (R&D CAMEE) has produced the 2015 Pinnacle Award Trophies for the American Society of Furniture Designers (ASFD). This is the second year R&D CAMEE has been asked to produce the custom trophies designed by ASFD designer Mark Tucker III.

This year, in addition to manufacturing the trophies in the Innovation Center’s advanced machining center, R&D CAMEE reached out to Virginia Tech’s Department of Sustainable Bio Materials to produce custom packaging for the trophies. The SVHEC has a long-standing relationship with Dr. Robert Bush, Professor of Forest Products Marketing, and asked for his help in developing custom packaging attractive enough to be a presentation box but sturdy enough to withstand the hazards of shipping.

Dr. Bush advised Virginia Tech students Stephanie Smith and Tyler Matusevich as they designed and produced a packaging system to meet the challenge. Smith and Matusevich exceeded expectations, by designing a unique solution that is not only functional but designed to highlight and complement the trophy.

When the team at VIRginia International Raceway wanted a custom trophy produced for the Oak Tree Grand Prix/Tudor United Sportscar Championship weekend, they came to the staff at the Southern VA Higher Education Center’s R&D Center for Advanced Manufacturing & Energy Efficiency (R&D CAMEE). Over the past few years, the R&D CAMEE team has developed a reputation for producing beautifully designed, signature trophies for prestigious competitions (see Pinnacle Award; Design Emphasis Award). The R&D team was honored with the request to design and produce a trophy for one of the largest races at the nation’s premier road course.

With the VIR trophy, R&D CAMEE embraced the theme “A personal victory deserves a custom trophy.” Their goal was to design a piece that would not only invoke pride for the winner but also instantly take him back to the track where it all began. There were several ideas discussed, but ultimately the R&D team decided “what’s more symbolic of VIR than the track itself?”

Using its sophisticated Siemens NX Computer Aided Design (CAD) software, the R&D team converted a topographical map of the track into a 3-D CAD drawing. They then used their 3 and 5 axis CNC routers and waterjet, to machine the replica of the track. This replica, made of aluminum and including the changes in elevation that make VIR one of the country’s premier road courses, became the head of the trophy.

The trophy’s shaft and base were carefully crafted out of solid white oak, giving homage to VIR’s iconic oak tree that fell July 2, 2013. Adding the final personal touch, R&D staff used their laser engraving capabilities to engrave the tiered base with the event name and date. The SVHEC’s R&D team hopes the trophy will become a tradition at VIR--a custom prize heavily sought, and hard won, by drivers for years to come.

awarded its second grant from the Center for Innovative Technology in Herndon, Virginia.

The $78,000 Commonwealth Research Commercialization Fund (CRCF) award will be used to advance Virginia’s capacity to manufacture Cross-Laminated Timbers (CLTs) out of Southern Yellow Pine. If R&D CAMEE is successful in certifying Southern Yellow Pine as a CLT building material it will open the doors to new manufacturing operations in southern Virginia that could lead to economic development and job growth.

“Energy has been identified as an important economic development opportunity for the state, and CLTs fit into that wider discussion,” said SVHEC Director of Research & Development David Kenealy. “CLTs are clearly on the radar, and buildings using these panels are now going up in the U.S. If Southern Yellow Pine is certified as an approved material that opens the doors to a range of possibilities for new manufacturing in southern Virginia,” he continued.

The International Woodworking Fair (IWF) is held every other year in Atlanta, GA. Among the competition categories is the Design Emphasis Award for advanced-level design students who excel in six categories: Case Goods, Commercial/Office/Hospitality Furniture, Design Creativity, Occasional Furniture, Ready-to-Assemble (RTA), and Seating. The winner in each of these categories is given a beautifully curved solid wood trophy designed by the late Sam Maloof.

Because IWF has a limited supply of the Maloof trophies, they approached R&D CAMEE in 2012 to re-create the iconic award. Using our reverse engineering, CAD, and CNC capabilities, R&D CAMEE replicated the beautifully curved, wooden trophy. Today, R&D CAMEE is proud to partner with IWF to produce the trophies for this prestigious, bi-annual woodworking competition.

This summer, the R&D Center for Advanced Manufacturing & Energy Efficiency (R&D CAMEE) was contacted by the American Society of Furniture Designers (ASFD) with a request to design-for-manufacture and produce their new Pinnacle Award. The Pinnacle Awards were created in April 1995 by the ASFD Board of Directors to promote design quality and encourage the recognition of furniture designers within the retail home furnishings industry. Each year the award is given out at the High Point Furniture Market award dinner.